The Thrill of the Chase

I was uncertain. I had done my hardest ever 5-day training block earlier in the week — 440 miles, 37,000ft of climbing — and then taken one day for rest. A day that found me eating ravenously — nothing could fill me up — and napping/lounging after a few morning hikes because I was fried. I had no idea how this “race” — technically it was an organized and supported ride, but it is timed and everyone in the first wave is out to hammer each other, which means race to me– would go. Would I be sufficiently recovered after a lazy day? Or would the mounting fatigue I had felt all week continue and make for a long day in the saddle?

On Friday afternoon, when I finally came to around 4pm, I started my usual pre-race preparations, prepping my fuel, laying out my clothes, and giving my legs a fresh shave. While it may seem ridiculous to be out shaving my legs in the middle of Death Valley on a camping trip, there was personal significance to the event for me.

Back in October 2009, I rode my first double century at the Fall Death Valley Double Century. After completing the ride (13:10), I decided that if I could ride 200 miles in a day, I had become a true cyclist and should get to the business of shaving my legs. Thus, I wasn’t going to ride this Death Valley Double Century with a week’s worth of leg stubble. I went and bought a ridiculously overpriced canister of shaving cream, pulled out my trusty razor I had brought with me, filled up a bowl of water, and away I went. 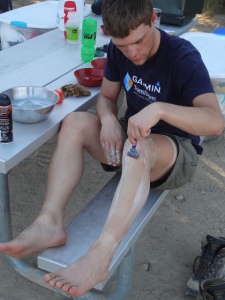 I woke up around 4:45am Saturday morning, and as I walked to the bathroom through the campground, I heard numerous alarms going off around me. Clearly, 5am was the wake-up call for everyone that day. Per my usual routine, I didn’t eat anything in the morning before the race. I prefer to start my fueling right away once the ride starts. If I’ve eaten a little beforehand, I find I am hungrier throughout the day, which is counterproductive. 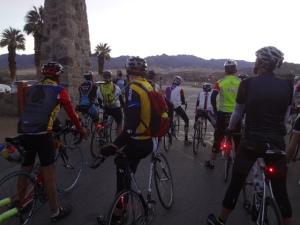 I chatted with the riders around me at the start while Chris Kostman, the ride director, jested with everyone through his megaphone. Someone started pointing out all the fast riders to me, saying which guys were going to go out hammering. As I had no idea about my own ability to hammer, I simply nodded and made a mental note.

Promptly at 6:10am, we were off. The big pack started moving down the road like a fat slug, stringing out for a bit, then clumping back up. I noticed right away that my heart rate wasn’t sitting in the doldrums and responded as I would expect if I were reasonably fresh. My legs didn’t feel wonderful, but the heart rate told me I had more in my stores than I had thought.

Like normal, I quickly rode to the front of the pack and took off. We were “racing” after all, so why not make a quick selection? One of the joys of ultraracing versus short races is the true battle of attrition. Everyone wants to get a low time or lots of miles, so no one sits at the back of the pack, we all work. Those with the legs get to play the role of knife slowly whittling the group down to the strongest riders that day.

A few miles down the road, the pack was still huge. I was pulling up one of the numerous one or two mile rollers in the valley when someone in a 508 jersey flew by me. I thought I had been going hard, but I was wrong. I surged to grab onto him, taking a smaller group along with me. Soon enough, we were down to a fast-moving paceline of 12 riders, clicking through the valley floor around 22-24mph.

Heading into my trip, I’d hoped to touch bases with George Vargas, who is starting up an ultracycling development team. Fortunately, he made the break, and we chatted for awhile about REVCycling . While I fit the mold of the solitudinarian  cyclist always riding alone as I wander the world, I think getting a team going is great. By all accounts, I should have at least another 50 years of ultracycling ahead of me, so the more we can perpetuate the sport across generations, the better.

At Ashford Mills, 45 miles in, the group split up. I had needed to pee for about an hour and a half, so I dashed to the bathroom and then stripped off my knee warmers, as things were heating up. Only about half of us stopped though, so the first chase of the day was on, uphill and into the wind that had recently kicked up.

I saw three riders ahead of my group of four, so I put my head down and started pedaling. Soon, only one rider was with me, an Ironman doing his first double century. We caught the three in front within a mile or so, but rather than join up with them, we rode right by. Given how fast they fell behind, it was a good choice. After many more miles of climbing we were nearing the crest of Salsberry Pass at 3315′ and had snagged all but the front two riders. The road started getting a little steeper and once again, I put my head down and pedaled harder. When I hit the top of the pass, I realized I’d dropped my riding buddy, and he was nowhere to be seen. Alas. Time to go alone.

I could see second place, Pat something?, ahead of me as I started the descent into Shoshone, so I flopped into the aerobars and began hammering around 40mph downhill. At the bottom, I finally caught him, and we rode together into the turnaround at Shoshone. 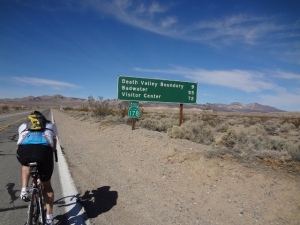 About a mile out of Shoshone, the leader, Joel Sothern, went by heading in the other direction. We hit the refueling station, stocked up on water, and I filled my prepared fuel bottle, and we started chasing. On the climb back up Salisberry, Pat said to just leave him if I started pulling away, so I did, surging ahead in search of Joel, the person in the 508 jersey at the beginning of the race that floated up the hills like he had helium in his tires.

I knew Joel didn’t have aerobars and the rolling terrain of the valley floor, along with all those flat Midwest miles, gave me the advantage once we hit the second, mostly flat 100 miles. However, I knew he would be miles ahead of me after the climbs. Furthermore, by this time, there were riders strewn all about the road. The slower double century riders were still heading up to Salsberry Pass, while century riders were churning up Jubilee Pass or were on their way back to Furnace Creek. Identifying Joel amongst all these riders became a fun game.

Hitting the valley floor, I sunk into the aerobars and started hammering away. My goal was to catch Joel and ride with him the rest of the way, or to blowup catastrophically and limp my way through the remaining miles.

One-by-one, I began passing the century riders. I knew I was looking for a dark jersey, so every rider thus clad gave me an extra surge of motivation as I hoped I’d made the catch. However, lots of riders wear dark jerseys, so I had a series of disappointments along the way. Additionally, the road curls along the alluvial fans vomiting their canyons’ detritus into the valley, so on the inward swings, I could see up to a mile down the road, identify the next potential rider, and keep plugging along around 22-23mph.

After 20 miles or so, I spotted someone in a dark jersey passing all the other riders on the road. I knew he must be Joel because otherwise he’d have been far ahead of these slower century riders already. About 8 miles out of Badwater, I caught him after 75 miles of chasing!

We quickly agreed to work together the rest of the time to try and go sub-10 hours. For me, I knew I couldn’t keep my previous pace for another 75 miles, so some drafting breaks would be great. Thus we rode, stopping to refuel at Badwater and the turnaround at Stovepipe Wells. Joel pulled more of the uphill sections, and I handled the downhills, since I had the aero and weight advantage when gravity was working for us.

After the turnaround, I started counting the miles until the next rider to get an idea of the lead we had built up. We didn’t see Pat until we had almost reached the turnoff onto the North Road to Scotty’s Castle, meaning we had built up a lead of almost 15 miles by this point. I pulled us to the top of the little hill at the turnoff, passed lead to Joel, and said, “The hard part is over. Let’s go.” 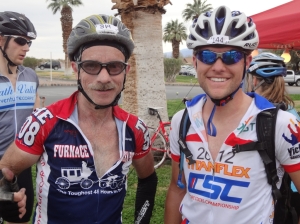 At the finish, I immediately began chugging drink after drink and wolfing down some pizza. The temperature had crawled up to about 85-90 for the second half of the race, so I was thirsty!

As each double century rider rolled in, we cheered and clapped for them. I sat around for 90 minutes or so talking with everyone else. I picked up a lot of new information on RAAM, met a potential two-man RAAM partner — solo RAAM is still the ultimate goal –, and generally talked ultracycling with those of our rare, quirky breed. Only at races do I encounter anyone else that rides ultra, so I relish the chance to swap stories and tips.

As I found out when I made it back to Michigan, our 9:47 tied Michael Emde’s course record. So now the three of us share it.

I had a great day in the saddle, pushed myself harder than I thought I could, and met some new friends along the way. Thanks to AdventureCorps and Chris Kostman for organizing a fantastic ride and all the volunteers who surprised me at their willingness to fill up my water bottles and pickup my bike of the ground. Deluxe service indeed!

I hope to be back for more rides out in the desert with The 508 looming large in my mind.

6 responses to “The Thrill of the Chase”